Trout, Coho and Pink Salmon are already using recently restored off-channel habitat at Simms Millennium Park near downtown Courtenay. The work was completed at the end of August 2017, and was led by Project Watershed, with funding from FWCP and others.

A larger, fish-friendly culvert, has been installed at a lower elevation. There is now increased water flows in and out of Simms Channel, and improved fish access during a variety of tidal cycles.

A second, large culvert now connects the channel to the Courtenay Slough. Together, the culverts have changed the hydrology of the area and created a true flow-through channel. The end result is improved water circulation, water quality, and improved fish habitat.

The channel, just under 250 metres in length, now has three deep pools, large woody debris and rocks. The outcome is better rearing habitat as well as a refuge for the fish to escape predation.  This side channel is one of only three areas of off-channel habitat along the Courtenay River where young fish can rear.

Positive changes as a result of the restoration have been plain to see. Pink Salmon and spawning Coho Salmon have been observed moving through the culverts and into the channel; where they have never been seen before. Schools of Westlope Cutthroat Trout have been reported in the channel (and the sighting will be confirmed), and the presence of Kingfishers and Great Blue Herons has increased.

The work has been years in the planning and involved many partners and volunteers. The K’ómoks First Nation Guardian Watchman and their summer students, as well the City of Courtney, helped with site preparation. Local residents also helped with fish salvage during the summer prior to construction starting.

The project aligns with the FWCP 2011 Puntledge River Salmonid Action Plan, and project to restore habitats in the Courtenay River and estuary.

The restoration work was funded by the FWCP, Fisheries and Oceans Canada, and the Habitat Conservation Trust Foundation.

The work is not over: Project Watershed is looking for volunteers to help plant more than 900 native trees, shrubs and plants between October 24 and 28, 2017. Anyone interested in volunteering for should contact Project Watershed at https://projectwatershed.ca/ 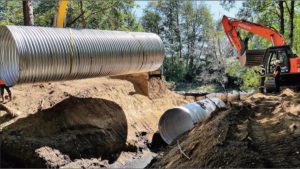