With funding from FWCP, an Eco-Cultural Restoration Plan for Katzie territory has been created to enhance wetland habitat. The plan combines scientific and traditional knowledge.

Much of the plan’s work is done but volunteers are needed this year to help with planting and monitoring the wetland.

If you are interested in volunteering to monitor and further improve this wetland habitat, email us at info@kdlp.ca. 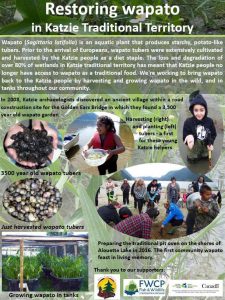 The Katzie First Nation has prepared a plan to restore species of conservation concern, and cultural value in the lower Alouette River watershed near Pitt Meadows.

About 80 per cent of wetlands in Katzie traditional territory, in the lower Alouette and Pitt River watersheds have been lost due to human development, including reservoir creation. Wetland loss has resulted in the extirpation or near extirpation of several federally-listed species-at-risk. Access to several species of cultural value have also been lost, and cultural practices that supported sustainable use of these species for food and medicine have also declined.

The plan, funded by FWCP, focuses on habitat enhancement for 11 species of conservation concern. The plan will also restore access to plant species of cultural value, including the wapato which has been identified as a cultural keystone species for the Katzie First Nation.

So far, one hectare of wetland, at two sites along the lower Alouette River has been restored through placing large woody debris, creating of tidal marshes, clearing beaches, installing shelter boxes, and planting native aquatics and berry-producing shrubs. The work is benefitting several species of concern including the Great Blue Heron, Barn Swallow, and Western Painted Turtle.

The restored wetlands were also designed to sustain large patches of wapato and tule, so that members of the Katzie and wider community can learn about and engage in traditional harvesting of these culturally-valued plants.