Restoring or enhancing habitat is valuable, but evaluation and monitoring follow-through can be equally as important. Such is the case with the Fisher Artificial Den Box Study. Den box video monitoring has resulted in a quick and inexpensive fix that may save the lives of many Fisher kits in the future. 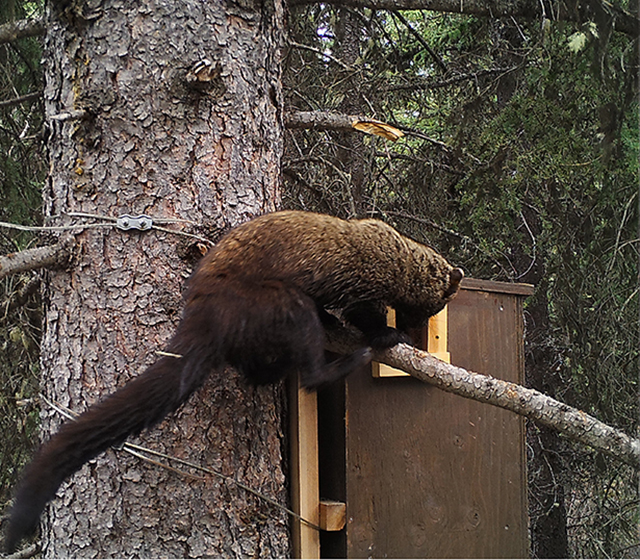 The entrances to the boxes have been strengthened to stop the male Fishers entering. Photo: Larry Davis.

Over the last five years, wildlife biologist, Larry Davis, and his team have installed 56 den boxes, about half of which are in the Bridge River watershed. Urban development, including reservoir creation, has resulted in the loss of large-diameter trees, which may be a limiting factor for Fisher reproduction.

The project’s main goal is to determine the extent to which these artificial den boxes will be used by female Fishers. Overall, the occupancy has been higher than anticipated, with between two and four boxes used in the last three denning seasons. In 2017, four of them had between one and three Fisher kits inside. 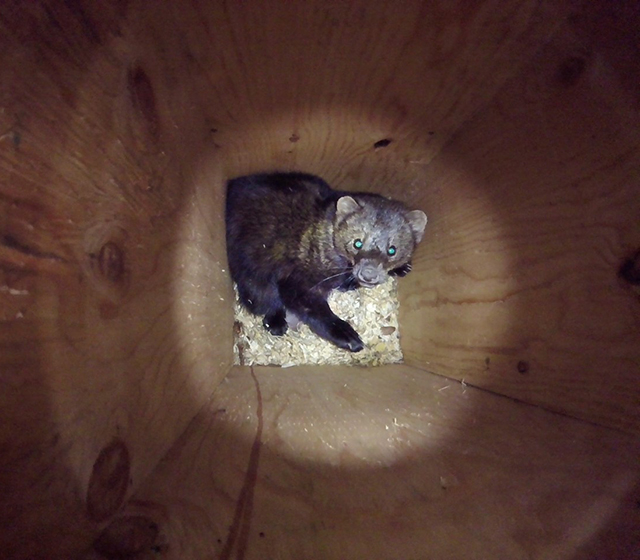 Predation of the kits can sometimes come from male Fishers, which are much larger than the females. The behaviour is to ensure that progeny from another male does not survive. Rare video footage captured a male in a persistent effort to chew his way into a box to carry out an act of cannibalism, while the female was out foraging. Two kits were killed in the event.

As a result, the biologists retrofitted every box with 2 x 4-centimetre door frames, made from solid wood, to prevent any future access from male Fishers and, in early 2018, no evidence of chewing on the frames was found. Monitoring has led to a simple fix that will help increase Fisher survival rates.

To see video of fascinating Fisher Behaviour, go to: youtu.be/CAkpibBaukU

The goals of this project are to determine the extent that artificial den boxes will be used by reproductive fishers, identify the degree to which these devices will mitigate losses of natural denning habitat, provide a science-based mitigation technique to address the loss of fisher habitat, and engage stakeholders that can influence fisher habitat in the conservation efforts for this species.

Fishers (Pekania pennanti) are a threatened species (S2S3) in British Columbia and are a high priority for conservation efforts. Fishers are the largest obligate tree-cavity user in North America and this study seeks to determine if the species will use artificial den boxes for reproduction. Trees with characteristics of natural fisher dens are rare in forested landscape and changes to the forest landbase resulting from hydro-electric development, insect infestations, forest-harvest activities, and large-scale fires are likely to have decreased the supply of these elements. This fifth year of the study continues the monitoring efforts on the 53 remaining den boxes.

Similar to 2017, monitoring during the reproductive season (April-June) identified four den boxes that were used for reproduction and three of the structures used were in the Bridge Watershed. The fourth den box is located in the Chilcotin near Puntzi Lake. Two den boxes that had not previously been used for reproduction were used in 2017, bringing the total number of den boxes used to 8 and reproductive uses to 10 over 4 denning seasons. Over the 4 years, an average of 1.7 kits were observed at the den boxes.