Studying Chinook and Bull Trout in the Bridge-Seton Watershed

This project will update the fish inventory and habitat data for the Yalakom River to address a long-standing knowledge gap, and support mitigation and restoration planning for salmonids, including Chinook, which were once a staple food for Xwisten (Bridge River Indian Band). Chinook stocks below Terzaghi Dam have declined, prompting renewed interest in restoration opportunities in the Yalakom River – the only major stream habitat accessible to fish populations below the dam. Past opposition to increasing Chinook access in the Yalakom has been based partly on Bull Trout status, however, the increasingly critical status of Chinook across its entire range is shifting local priorities towards a multi-species approach.

Update: Electrofishing surveys conducted at 12 sites on the Yalakom River

Electrofishing surveys conducted at 12 spatially distributed sites on the Yalakom River in the Bridge Seton River Watershed by Coldstream Ecology in October 2019, showed four fish species: Chinook and coho salmon, bull trout, and rainbow trout/steelhead (Oncorhynchus mykiss). Bull trout and rainbow trout/steelhead were the most abundant and widely distributed species observed. Coho and Chinook salmon were observed in the lower five km of the Yalakom River and at relatively low abundances. Samples were not taken above river km 32 due to cold-water temperatures precluding the implementation of electrofishing surveys. Fish habitat use in the upper Yalakom River will require additional research. 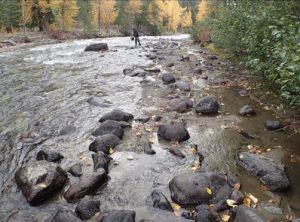 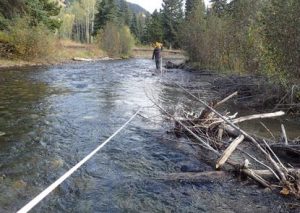 The Bridge River project was developed in the 1940s to provide hydropower to the greater Vancouver area. The project is comprised of two dams; LaJoie Dam, located on the upper river near GoldBridge, B.C., and Terzaghi Dam, located ~40 km upstream from the Bridge River’s confluence with the Fraser River. Terzaghi Dam was designed to hold and divert all water from the Upper/Middle Bridge River to hydropower generating stations in the adjacent Seton River watershed; however, two major operational changes have occurred at Terzaghi in recent years: (1) the initiation of continuous flow releases from the dam, and (2) nearannual high-flow spill events. The effects of flow releases on the aquatic ecosystem downstream of Terzaghi Dam are complex but have included declining juvenile salmonid fish abundances.