The Comox Valley Project Watershed Society will lead this project to restore the Kus-kus-sum conservation lands located along the salmonid migration corridor that connects the K’ómoks Estuary to upper watershed spawning habitats in the Puntledge and Tsolum watersheds. The former sawmill site will be restored and will eventually provide suitable habitat for fish and wildlife. This project will define the restoration plan and work toward the removal of paved surfaces, derelict buildings, and concrete currently covering 8.3 acres of the site.

The restoration of a sawmill site along the Puntledge River is one step closer to being realized: new provincial funding will secure the purchase of the Kus-kus-sum conservation lands. We helped fund the purchase and develop the site restoration plan, which includes the removal of 3.36 ha of concrete and metal cladding along the shoreline. Restoration will improve habitat and increase survival for Chinook salmon and other species at this site of cultural and environmental significance to the K’omoks First Nation.

A building covering 233 m² was demolished and 117 m² of concrete was removed from the former sawmill site. An updated restoration design was completed, alongside a planting prescription, sub-surface scanning, and soil testing. The site is of cultural and environmental significance to the K’omoks First Nation, and is next to a salmon migration corridor that connects the K’ómoks Estuary to spawning habitats in the Puntledge and Tsolum River watersheds. 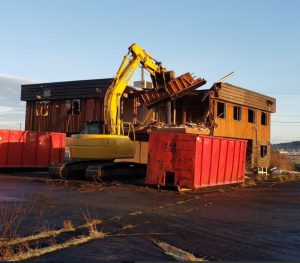 The Kus-kus-sum project is an initiative, being undertaken by the Comox Valley Project Watershed Society (CVPWS) in partnership with the K’ómoks First Nation (KFN) and the City of Courtenay (CoC), that aims to purchase a former industrial sawmill site alongside the Courtenay River within K’ómoks Estuary for the purpose of reverting it back to fish and wildlife habitat for long-term conservation. CVPWS and their project partners successfully negotiated a deal to purchase the property from Interfor Corporation in September 2017 and had until June 30th, 2020 to raise the funds to buy the land. Once the land was acquired the restoration of the property could begin. With this goal in mind CVPWS secured funding from the Fish and Wildlife Compensation Program (FWCP) to begin the restoration of the site in the summer of 2020, as this initiative aligns with the priority action PUN.RLR.HB.16.01 in the FWCP Puntledge River Watershed Action Plan. One of the stipulations of the FWCP funding was that restoration could not begin at the site until the property title had been transferred.

However, the Covid-19 worldwide pandemic had a significant impact on the land acquisition phase of the project, including planned fund-rising activities, and the property title did not transfer over to CVPWS until Feb 23rd, 2021 – at which point CVPWS could begin restoration of the site. The initially planned restoration activities for 2020 included the removal of the derelict office building on the site, and the start of the removal of the hard surfacing that covers the site. Although the removal of hard surfacing was scaled back most of the other restoration objectives were met. Completed work during included some preliminary surface and subsurface testing, followed by a more extensive soil sampling and laboratory analysis to determine if any pre-existing contamination was present. Initial test pits gave supporting evidence that suggested that the restoration plan and budget should be updated to take into account an increased thickness of surface concrete to be removed and variable sub-surface conditions, potentially increasing need for soil amendment. These changes were made, and updated plans and modelling were carried out. Hydraulic models were done to better show likely inundation levels, with tidal flow and freshwater input, with the new proposed design. The last of the standing infrastructure on site, one derelict office building was demolished 5 | Page during March 15-24th, 2021 and building materials from the building demolition were re-used and recycled wherever possible. Now that initial restoration work has been completed, the project can move forward to complete the restoration of the site by 2023.