Assessing health of Stone’s Sheep in our Peace Region

This multi-year project, led by the Wild Sheep Society of BC, will focus on the two southern-most, functionally viable Stone’s Sheep populations, the Dunlevy and Schooler herds. Due to their proximity to domestic farms and overlap with elk, these wild sheep are at high risk. The project will reassess their health and examine population demographics, behaviour, distribution, and habitat use of Stone’s Sheep through use of GPS collars. Information gained from this project could be used to inform future conservation and enhancement actions for Stone’s Sheep.

Ten wild sheep have been outfitted with GPS collars as part of a multiyear project to examine the population demographics, behaviour, distribution, and habitat use of the two southernmost functionally viable herds of Stone’s sheep. With these newly deployed collars, the project’s sample size is up to 16 sheep in the Dunlevy and Schooler herds, which are at high risk of exposure to pathogens because of their proximity to domestic farms and elk.

The project, led by the Wild Sheep Society of British Columbia with funding from the FWCP, also gathers data through observation and health assessments. Fifty sheep, including six lambs, were observed in a late March 2021 survey of the Dunlevy herd, which points to a relatively stable population. Eight sheep in the herd were tested for five viral and bacterial pathogens known to affect wild sheep, and all had negative results. Fecal glucocorticoid metabolite levels, however, indicate these sheep are at a significantly higher stress level than those in other herds.

Stone’s sheep is an inventory species in our Peace Region’s Uplands Action Plan, meaning inventory and/or trend monitoring is required to better understand population status, critical habitat needs, and key limiting factors. The next steps for this project will be to study the collared sheep to determine movement, behaviour, and landscape use. 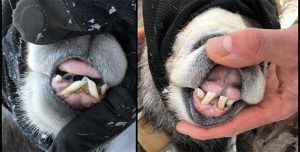 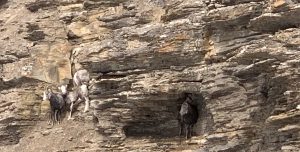