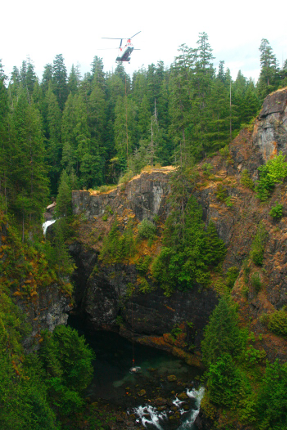 No public access to Elk Falls February 24-26, 2016 during construction of new “skyline.”

People have been going to the Elk Falls suspension bridge, near Campbell River, in droves since it opened in May 2015. And fish restoration experts hope a different type of bridge will help attract fish to the river below. Getting the fish to come is all about getting gravel into the river. A new and improved way of getting gravel into the canyon below the falls is about to be installed and will be more efficient, effective and help create more spawning habitat. Construction of a skyline to transport and deposit gravel into the canyon is getting started now.

The BC Conservation Foundation (BCCF) is leading a spawning gravel placement project that will begin February 22. The first component is construction of a gravel loading pad and access trail on the south side of the canyon and the drilling of steel anchors into the north canyon wall. A steel cable will be installed to carry a remote release gravel bucket that will drop gravel into the river below. The cable will be placed about 30 metres downstream of the existing suspension bridge. The cable will only be up when the gravel is being placed so there will be no visual obstruction from the suspension bridge. The gravel will be brought in using existing and new trails.

“The creation of the John Hart dam in 1947 stopped the natural recruitment of gravel into the canyon from upstream,” says BCCF project lead, Jeramy Damborg. “There’s good fish habitat from the generating station up to Elk Falls. It’s about 1.8 km long and provides spawning and rearing for Steelhead, Coho and Chinook, among other fish. Suitable spawning gravel within the canyon area is a limiting factor to fish production.”

Since 1999, given the importance of gravel for fish productivity, gravel has been delivered six times. The very difficult access with the steep vertical canyon walls has meant the gravel has been delivered in buckets by a heavy lift helicopter, which is expensive with helicopter time costing $2 per second. Safety is another important consideration.

“We are anticipating that once the infrastructure is installed the new gravel placements will be about a quarter of the cost of the previous delivery method,” says Damborg. “That means we can add more gravel on a more consistent basis, hopefully every one to two years.”

Damborg says the gravel, once delivered, slowly moves and spreads downstream when flows released from the John Hart dam are increased.

“We have previously funded gravel additions in the canyon, and are now very pleased to be able to support this initiative,” says FWCP’s Coastal Region Manager, Trevor Oussoren. “It will create significant efficiencies and cost savings, and this method to replenish gravel on a more regular basis will certainly help to maintain important fish habitat.”

BCCF is finalizing a Park Use Permit with BC Parks, the landowner, which outlines BCCF as the owner of the gravel delivery asset.

“We went through a similar process with the Rotary Club on the suspension bridge project, and while the goals are for fish for 0this project, the intent is the same – making it more productive and minimizing any impacts to the park as much as possible,” says BC Parks supervisor, Brent Blackmun.

The total project cost is about $161,000. Funding was primarily provided by Fisheries and Oceans Canada, Fish & Wildlife Compensation Program, and the Campbell River Salmon Foundation.

“We would like to get the word out that the infrastructure works may last up to four weeks starting February 22,” says Damborg. “We will have signage and sometimes flaggers to keep the public safe along the trail in conjunction of some trail closures or delays on February 23. Then there will be full trail closures to Elk Falls from February 24 to 26; people will be unable to access the falls. There may also be some short trail delays as we move equipment and materials in and out during the remainder of the construction period. Noise during drilling operations is also expected. We appreciate people’s patience and apologise for any inconvenience.”

Photo Courtesy of BCCF. Historically gravel for fish spawning has been delivered by helicopter. Starting this year onward, gravel will be delivered via a skyline that’s being installed by the BC Conservation Foundation.